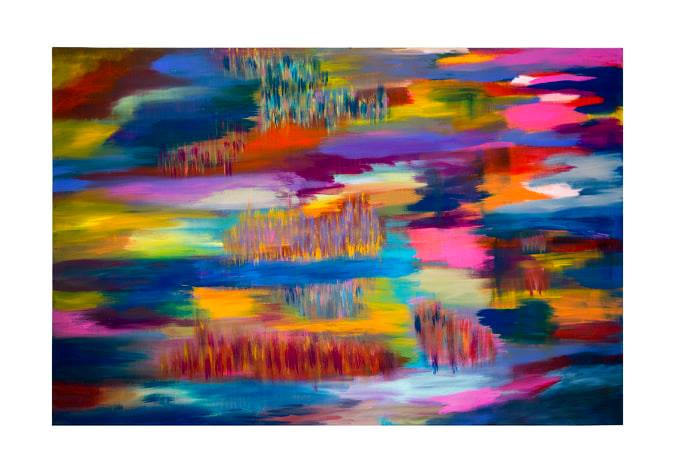 This was another attempt at a large scale work in order to establish whether some of the processes previously used can be scaled up successfully.

What you see as the end result is in fact the third iteration of the picture the previous two not producing a result I was happy with.

Version one was the use of a bungee rope to impact paint on the canvas along with a stippled effect using a sponge-like instrument. On the larger scale it was difficult to get the same visual impact as with Bungee 2 for example.

V1 was therefore over-painted with a stripe effect but the result looked like a bamboo fence!

V2 was therefore scrapped and again over-painted using a sideways motion with a one inch brush using a combination of approximately 20 emulsion colours.

The result in my mind is a “skyscape” of multi-coloured clouds and light penetration punctuated with sharp spikes which could be shooting stars or similar. Equally one viewer has likened the image to a pond!

Lessons learnt: seems obvious but the beauty of painted art is that work you are unhappy with can be transformed into something better. In fact the form of the previous version can be used to enhance the final version.