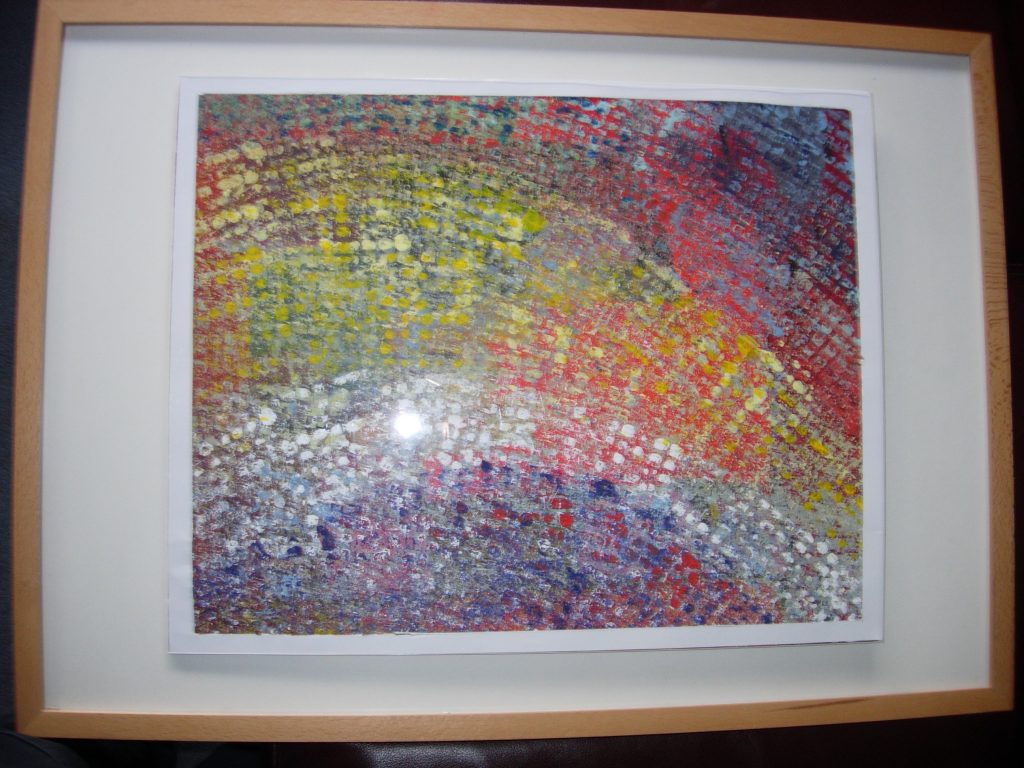 Media: emulsion and acrylic on canvas board

Colours: complete mix of colours from Little Green and Wilko emulsions to acrylic.

Description: This work continued my experiments with  “unusual” impact techniques to transfer paint to the canvas in order to produce a different visual effect.

I used a previous work on canvas board that had been “rejected” and had been hidden away for several months. Needing a board for this latest work i turned to this old work to experiment with this latest technique.

In tidying up my desk a few days earlier i had come across an old sharp calculator which was not working but it seemed a shame to throw it away. I was drawn to the array of buttons which spring back when pressed and immediately thought that they could be used to transfer paint to paper.

I therefore began to paint half of the buttons and dabbed these randomly on the pre-painted canvas. The result was pleasing on the eye and easy to apply. I made a point of cleaning the calculator buttons between applying different colours as I wanted a transitional effect between adjacent areas of the canvas.

This worked well and the shape of the picture developed as the dabbing process continued. I began to produce curved shapes and decided that this should be the style of the work.

The picture started in portrait mode but upon completion it was rotated the full 360 degrees and landscape mode with the curvature left to right descending gave the most visual pleasure.

An unintended visual feature was that the straight lines of the previous work can just been detected in parts of the canvas adding to the visual interest.

Self-satisfaction score: 7/10 I think that the technique worked really well  for the first attempt with the result quite striking and unusual.  The underlying previous work also gave it an added dimension when painted over.

Top Tips: 1. the use of the buttons on the calculator worked well partly due to their springy nature; 2. by painting coloured shapes as an undercoat rather than just a solid background you get an added visual effect when applying the top surface paint.

On show at Suki Gallery, Tutbury.