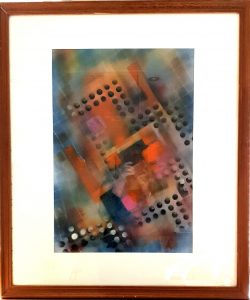 This work was an experiment of three combinations – spray paint, acrylic paper and wire and cardboard templates.

There was no vision of the final work but a focus on the process to see how it worked and the results from the interaction of paint, media and template.

Firstly the background was produced using four layers of chicken wire overlapped in different directions. Several spray canisters of different colours were sprayed through this on a random basis. The results were quite startling both in terms of the 3D effect and the way the spray paint was absorbed by the paper producing a matt and subtle effect.

Then a cardboard template with circles and squares was used to spray through to produce the upper layer. The use of black and white solid circles added to the 3D effect.

Self satisfaction score:  8/10 an unexpected striking result with the 3D effect, colour combinations and texture of the paint on paper.

Lessons learnt: an emphasis on process rather than vision can be equally effective and rewarding as the result can be somewhat of a surprise. Ideally the media would be of a more “permanent” nature than paper (e.g. board) but doing so might lose the textural effect.